Cuttack is the former capital and the second largest city in the eastern Indian state of Odisha. It is also the headquarters of the Cuttack district. The name of the city is an anglicised form of Kataka which literally means The Fort, a reference to the ancient Barabati Fort around which the city initially developed. Cuttack is also known as the Millennium City as well as the Silver City due to its history of 1000 years and famous silver filigree works. It is also considered as the judicial capital of Odisha as the Odisha High Court is located here. It is also the commercial capital of Odisha which hosts a large number of trading and business houses in and around the city. Cuttack is also famous for its Durga puja which is the most important festival of Odisha and West Bengal. Cuttack is also the birthplace of Netaji Subhas Chandra Bose.

The old and the most important part of the city is centred on a strip of land between the Kathajodi River and the Mahanadi River, bounded on the southeast by Old JagannathRoad.The city, being a part of the Cuttack Municipal Corporationconsisting of 59 wards.Cuttack stretches from Phulnakhara across the Kathajodi in the south to Choudwar in north across the Birupa River, while in the east it begins at Kandarpur and runs west as far as Naraj. Four rivers including Mahanadi and its distributaries Kathajodi, Kuakhai, Birupa run through the city. Further Kathajodi is distributed into Deviand Biluakhai which often makes the geographical area look like fibrous roots.

Cuttack and Bhubaneswar are often referred to as the Twin-Cities of Odisha. The metropolitan area formed by the two cities has a population of 1.862 million in 2018.Cuttack is categorized as a Tier-II city as per the ranking system used by Government of India.

Cuttack an unplanned city, is characterized by a maze of streets, lanes and by-lanes which has given it the nickname of a city with Baban Bazaar, TepanGalee and i.e. 52 markets and 53 streets. 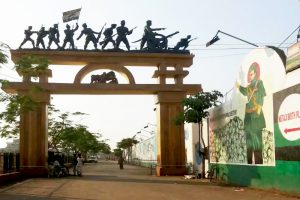